Be very careful what your children watch when they are 8 years old! A lifelong obsession has resulted in the re-creation of the “Back to the Future” DeLorean Time Machine as featured in the movie trilogy.  This is not a screen used car, but has been re-created with an extreme attention to detail and using the exact same parts as the original build team in 1984.  This cars ultimate claim to fame was in 2010 when Universal Studios contracted us to be the car for the BluRay release of the “Back to the Future” trilogy in New York city.  All of the top billing cast and crew involved with the trilogy have been in this car, including Michael J Fox, Christopher Lloyd, Robert Zemeckis, Bob Gale, Huey Lewis and more!  Proudly supporting “Team Fox” the Michael J Fox Foundation for Parkinsons Research, TimeMachineForHire.com along with WereGoingBack.com have raised over $200,000 and continue to donate towards this cause. 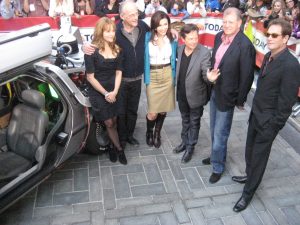